MAZI exhibit gets a debut at Explorathon

Mazi project partners at Edinburgh Napier University have developed an interactive demo exhibit, titled Network Roulette. The first public trial of the exhibit took place at the Whale Arts Centre in Edinburgh, UK, in late September as part of Explorathon 2017, Researchers’ Night Scotland. European Researchers’ Night is a European Commission initiative which gives people the chance to meet researchers and find out about their latest discoveries in more than 300 cities. The Network Roulette exhibit demonstrates how you can build your own WiFi network to share photos and media files with people nearby.
www.explorathon.co.uk
Explorathon is funded by the European Commission under the Marie Sklodowska-Curie actions programme. 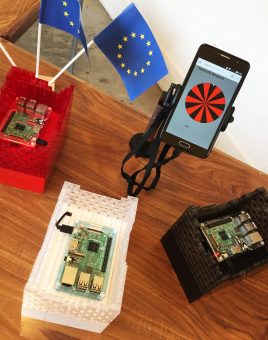